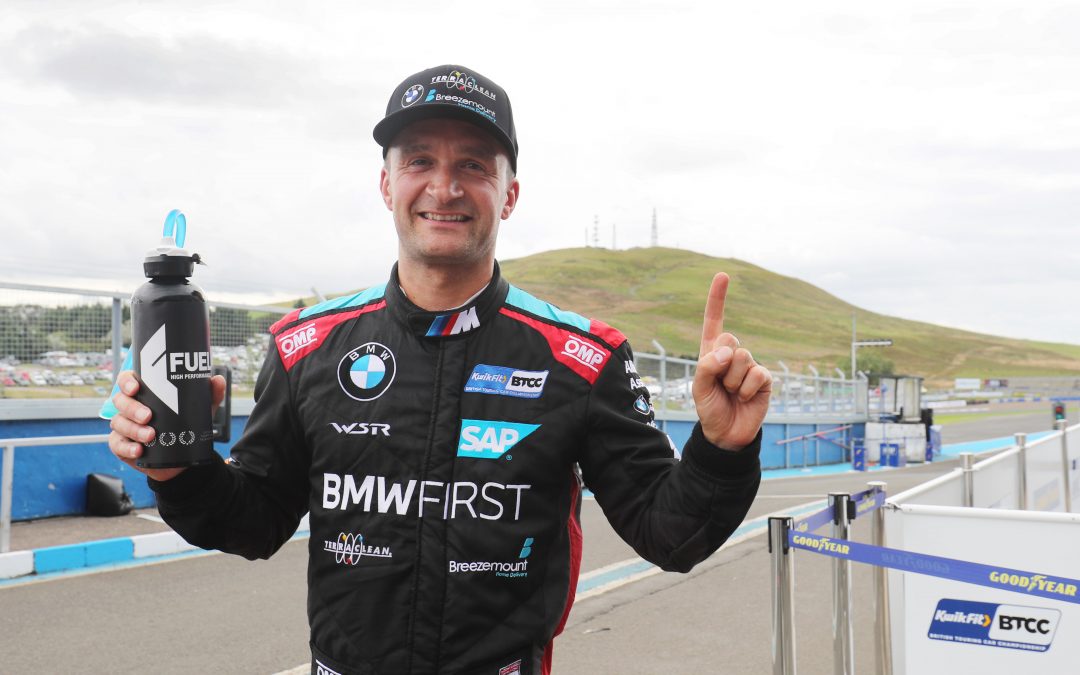 Team BMW’s Colin Turkington secured a crucial British Touring Car Championship pole position at Knockhill on Saturday on a day when the field was even more closely-matched than normal.

Having gone third-fastest in a wet opening practice and then fifth in the afternoon session, the four-time champion was in contention for pole from the start of qualifying aboard his WSR-designed, built and run BMW 330i M Sport.

Carrying just 15kg success ballast after a pair of less-than-ideal weekends dropped him to ninth in the Drivers’ points, the Northern Irishman drew on all his experience to improve his laptimes as the session progressed, in spite of a pair of red flags for incidents.

A simply stunning 50.836s lap with four minutes remaining – aided by a tow on the main straight from team-mates Stephen Jelley and Tom Oliphant – helped him score his second pole of 2021 – and the 24th of his career – by 0.117s.

Tom had been fifth quickest in FP1 in the wet, but couldn’t quite unlock the potential of the BMW in qualifying.

Despite this, the Leamington Spa-based racer was less than 0.3s away from pole and just 0.1s away from a second-row start. He is aiming to make up positions from 10th on the grid.

Stephen also suffered a tough session. Locking-up early on and suffering a resultant handling issue, he too was unable to maximise the 3 Series’ potential around the 1.3-mile circuit in Fife.

The Leicester racer, who took a season’s-best second place at Oulton Park last time out, starts Race 1 from 14th place, less than 0.5s from pole and carrying 9kg success ballast.

Colin Turkington said: “It’s nice to be back at the front of the grid after a couple of pretty unrewarding weekends. We’ve been fast all day, whether it’s been wet or dry and conditions were right for what was a qualifying lap I was pretty proud of – I certainly left nothing in reserve on that one. I ended up getting a good tow from Tom and Stephen, which must have helped, but now the focus moves onto tomorrow and the need to deliver big points and get myself back into the championship hunt.”

Tom Oliphant said: “One tenth of a second would have put me third on the grid. That’s a measure of how close the BTCC is nowadays, especially at a short circuit like Knockhill. Things looked good after my first run, but on my second run I was just too messy and couldn’t improve to where I think I should have been. There are a lot of heavy cars that have been very fast, so while I’m confident I can go forwards tomorrow, I’m not sure by how much.”

Stephen Jelley said: “I was pretty disappointed until I saw the time gaps and realised that while 14th place doesn’t look great, I’m not that far off pole really. I had some issues getting the BMW slowed down for Clark corner and the Hairpin and ended up locking up, which left me with quite an imbalance. We made some set-up changes during the session and I started taking the slower corners in a lower gear, which isn’t ideal, but did find me a few tenths that moved me up near the end.”

Dick Bennetts, Team Principal, said: “It’s very good to have Colin back on pole for the second time in 2021 as it’s a great opportunity to get back into the hunt for the Drivers’ title tomorrow. It’s actually our first pole at Knockhill in six years and only our third ever at this track. Given the relative lack of ballast in Colin’s car and a dry track that usually favours rear-wheel-drive cars, all the conditions played in our favour today. We’ll definitely aim to win tomorrow with Colin while Tom and Stephen can both certainly gain positions from where they start.”