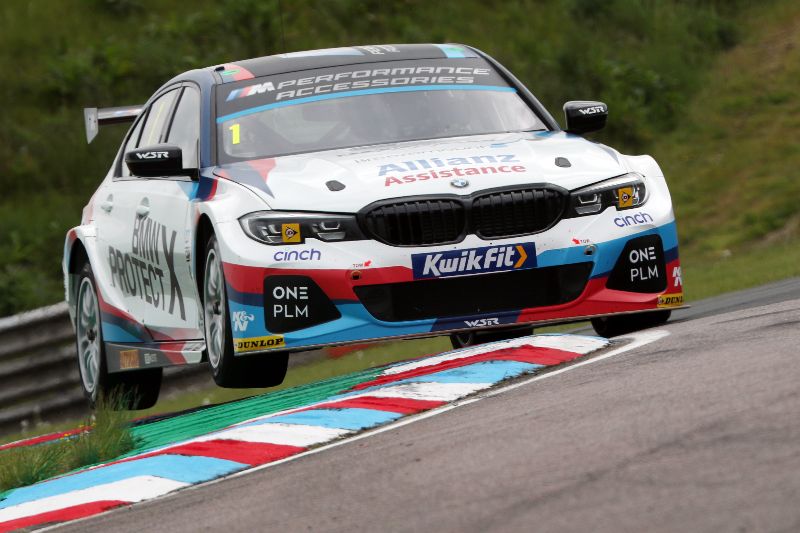 Reigning British Touring Car Teams’ and Manufacturers’ Champions Team BMW will start from the second row of the Thruxton grid on Sunday with a strong vein of confidence after another compelling qualifying performance for the new BMW 330i M Sport.
Reigning champion Colin Turkington, who set a personal best lap around the Hampshire speed-bowl, will line-up fourth, just behind his WSR stablemate Andrew Jordan, who drives the BMW Pirtek Racing 3 Series.

The team was on the pace throughout practice, and in spite of carrying 36kg success ballast due to his double-win last time out at Donington Park, the three-time champion was able to match Andrew’s time to within a tenth of a second; with the duo being the fastest rear-wheel drive runners to start tomorrow’s 16-lap opener.

Team BMW team-mate Tom Oliphant also showed strong pace through practice and qualifying and could have placed higher than his 10th-position slot, but instead sacrificed his chance and saved a set of tyres for the race on the notoriously abrasive Thruxton surface.

Colin Turkington said: “We’ve had a really good day. I think everyone has faced challenges with the track conditions, and we’ve been working hard to ensure that we have a car we can race with tomorrow – which is critical around here. We’ve found speed and I went faster than I did last year! But then to go into qualifying with 36kg success ballast, and qualify fourth, is really encouraging. This new BMW 330i M Sport is making great strides with every track we come to.”

Tom Oliphant said: “I’ve always been better in the races at Thruxton and something I learned from my junior racing days is to minimise my laps in qualifying so I have a better race car. My plan was to qualify in the top 10 and try to only do two runs in qualifying and I’ve executed that plan. I have four or five front-wheel drive cars in front of me and I’m feeling confident ahead of tomorrow.”

Dick Bennetts, Team Principal, said: “I’m very pleased. To be third and fourth around Thruxton is very encouraging on our first time here with the new BMW 330i M Sport. Three cars in the top 10 is very good indeed. Colin looks strong for tomorrow, despite his ballast, and Tom decided to sit out a run to keep his third set of tyres just scrubbed for the races, which was a sensible play. ”