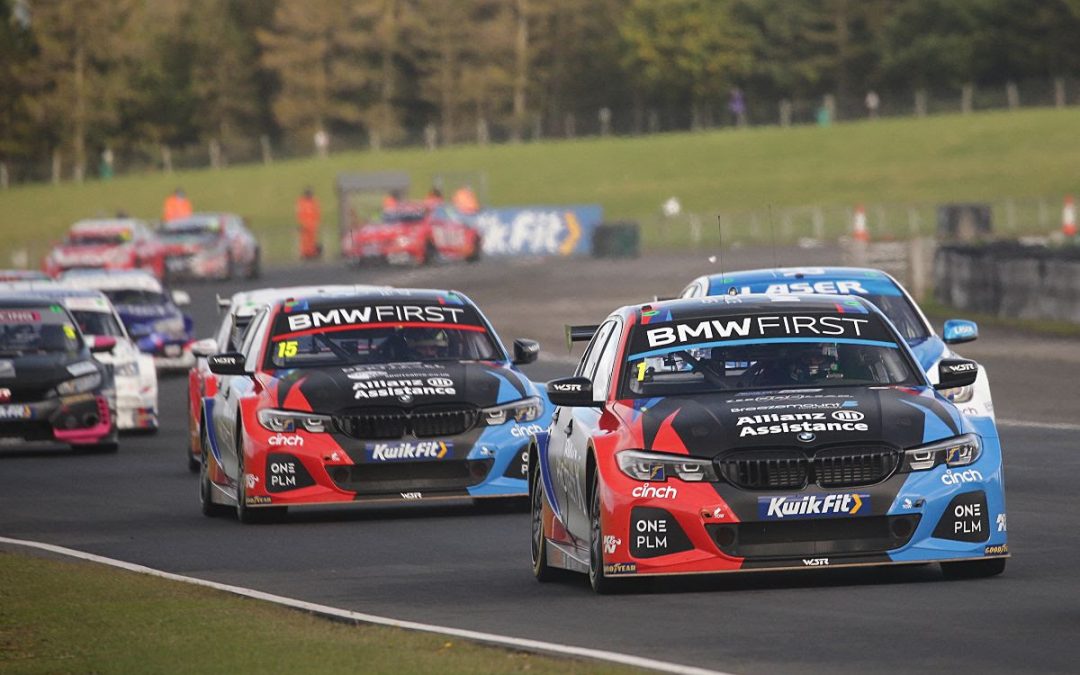 Team BMW aim to swing the momentum back in their favour this weekend as the battle for the British Touring Car Championship intensifies at Snetterton.

Following a challenging weekend at Croft last time out, when strong pace went unrewarded, Colin Turkington and Tom Oliphant are third and sixth in the Drivers’ standings with just two events to go.

Despite this, the consistency shown by both means the WSR-run team still head the Teams’ and Manufacturers’ points tables.

With 10 podium finishes so far in 2020, including three wins, Colin has a higher score after the opening seven events than he had at the same point last year.

He is just 12 points away from the series lead with 20 on offer for each remaining race victory; the Northern Irishman’s third position in the standings meaning he starts the weekend with 48kg success ballast aboard his BMW 330i M Sport.

Colin was victorious at Snetterton last year on the current 3 Series’ first appearance there; the most recent of five wins for the 38-year-old at the Norfolk circuit.

Leamington Spa-based Tom remains on-course for his best-ever championship finish in the BTCC thanks to four podiums so far in 2020, including a breakthrough win at Brands Hatch.

The 30-year-old lies sixth in the Drivers’ standings, so carries 30kg into the race weekend, but is only two points away from a top-five spot and could pull himself right back into title contention should he score well with his rivals having less-than-stellar events.

Snetterton will feature a revised format on Saturday with a departure from the regular 30-minute qualifying session.

Instead, the fastest 10 cars after 25 minutes have elapsed will move into a separate pole-position shoot-out for a further 10 minutes, while the remaining drivers will be frozen in their grid spots for Sunday’s opening race.

To accommodate this, there will be just a single free practice session on Saturday morning, which will be increased to 50 minutes.

All three races will be broadcast live in HD on ITV4 on Sunday.

Colin Turkington said: “We only have one 50-minute practice as opposed to two 40-minute sessions, so there will be less opportunity to experiment with set-ups and we’ll need to be fast out of the blocks, but I expect the same names to be at the front come qualifying. BTCC teams test a lot at Snetterton, so we have a good idea of where to start, but we normally race here in July, not October. It can be difficult to carry weight at Snetterton – I know that from recent years. I’m a bit lighter this time with 48kg, so my qualifying lap needs to be perfect to get to the front.”

Tom Oliphant said: “I’m heading to Snetterton knowing we need to score some big points this weekend. We’re in the top six in the standings currently, but a little way off the championship leader. I’ve always enjoyed Snetterton. As the longest circuit on the calendar, it’s a tough one to master, but I’m confident we can put in a strong performance.”

Dick Bennetts, Team Principal, said: “Traditionally we race at Snetterton in the summer, so track temperatures will be a lot colder than we’re used to and this will present a challenge;  both in making sure we start the weekend with a good baseline set-up and in being able to adapt to changing conditions. Switching on the tyres in qualifying will be of critical importance as it’s easier for a front-wheel-drive car to do this, but we’re confident we have a package that can bank a lot of points and keep both Colin and Tom in the title hunt through to the final weekend at Brands Hatch.”

1996 – On our first visit to the circuit as a BTCC team, Paul Radisich and Steve Robertson score double-points in the Ford Mondeos.

2007 – Tom Onslow-Cole breaks his BTCC duck with a Race Three victory in the WSR-run BMW 320si.

2009 – Colin Turkington takes a major step towards his maiden BTCC title with a hard-fought win in the BMW 320si.

2019 – Colin Turkington storms to a critical fifth win of the year in the BMW 330i M Sport in Race Two to open up a 40-point lead in the standings.