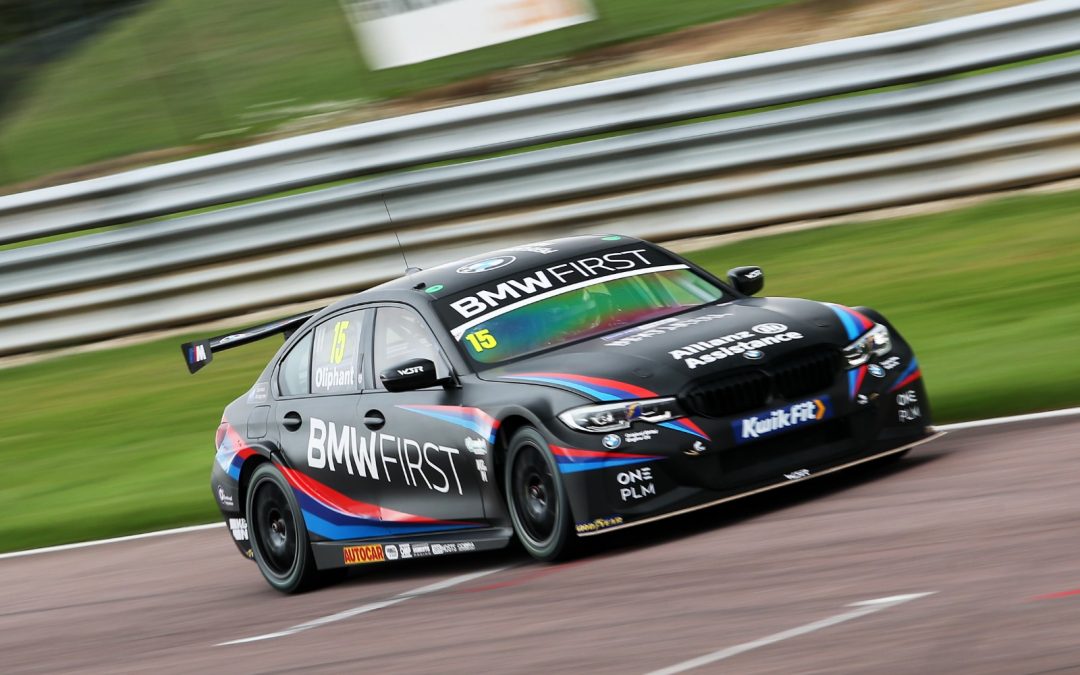 Tom Oliphant put Team BMW on the third row of the British Touring Car Championship grid at Thruxton with his best qualifying performance to date at the Hampshire circuit.

At BMW UK’s local circuit, Tom’s team-mate Colin Turkington ensured two of the WSR designed, built and run 330i M Sports will start Sunday’s opening race from inside the top 10.

Tom, fresh from celebrating his 31st birthday a week ago, was on superb form throughout Saturday and set the second-fastest time in afternoon practice at the 2.X-mile speedbowl, which is the fastest circuit on the BTCC calendar.

The Leamington Spa-based racer then translated that speed into qualifying to snatch fifth place on the grid – his best-ever Thruxton BTCC qualifying – with a time just three tenths of a second away from pole position.

Colin, who scored WSR’s 100th BTCC victory last time out at Knockhill, carried 57kg success ballast through practice and qualifying due to being third in the Drivers’ Championship, making the Northern Irishman’s BMW 3 Series one of the heaviest cars on the grid.

Despite this, the four-time series champion lapped just nine hundredths slower than Tom in qualifying, but this resulted in ninth place on the Race 1 starting grid due to the closeness of the competition for the front three rows.

Stephen Jelleye endured a trying FP1 as he left the road, hit the tyre barriers heavily and brought out the red flags with a quarter of the session remaining.

Slick and quick teamwork by the WSR mechanics meant the damage was soon repaired, but with the gap between FP1 and FP2 so short, Stephen was still forced to miss the opening half of the second session.

The track time lost resulted in 15th place on the grid for tomorrow’s opener; the Leicester racer – who carries 21kg success ballast – targeting a significant move forwards during the trio of races, all of which will be shown live on ITV4.

Tom Oliphant said: “It’s been a good day. Thruxton isn’t a track I particularly like or have an especially good record at, so this is probably my best qualifying here and certainly to be competitive – and the fastest rear-wheel-drive car – is really pleasing. It’s no secret that we don’t have the same advantages as the front-wheel-drive cars in qualifying; there are certain things they can do with their set-up that we can’t, but in the races things should be a lot more even. It was good that we could translate the strong pace we showed in practice into speed in qualifying. I’m aware I didn’t have any success ballast, so that’s been a help. As long as nobody hits me tomorrow, I’m confident of having a strong day and scoring a lot of points.

Colin Turkington said: “Realistically being inside the top 10 was what I was capable of and what I was shooting for today. With 57kg success ballast you always feel slow and like there’s more left on the table, but honestly I believe we did the best job possible and got the most out of the BMW. It takes quite a lot to pin down the set-up at Thruxton, which is a mixture being on the hard tyre and the amount of weight we’re carrying – it’s quite a narrow set-up window – plus you only really get one lap on each set of tyres in qualifying. The car’s been pretty sensitive to changes today but that’s the same for everyone, I think. The important thing is I’m where I need to be and I’ll be aiming for the top 10 in Race 1 tomorrow and then trying to go forwards with less weight.”

Stephen Jelley said: “Fifteenth on the grid is probably the result of my accident in FP1, where I just made a mistake, got a little bit of oversteer at Turn 1 and suffered the consequences – plus I lost two of my new tyres for the rest of the day. The team did a mega job to get the car repaired and out again by FP2, but that accident probably put me one run behind everyone else, which is probably worth a couple of tenths here. The balance of the BMW is really good and I’m sure I can go forwards tomorrow. I’m playing the long game and will have to try and rely on the Race 3 reversed-grid draw.”

Dick Bennetts, Team Principal, said: “To come to a track like Thruxton – which is always going to favour front-wheel-drive cars in qualifying – and put two cars in the top 10 is a good result. Tom’s done an excellent job to take the pace he showed in practice and repeat it in qualifying. He’ll be out for the best result possible tomorrow and the podium’s definitely our target. Colin’s been very impressive to be only a tenth of a second slower while also carrying 57kg success ballast and if we can continue to reduce his gap to the championship lead tomorrow then that will be mission accomplished. The team did a fantastic job on Stephen’s car to get him back out and he’ll be out to try to reward them tomorrow. Sunday’s payday and we’re going to make it count.” 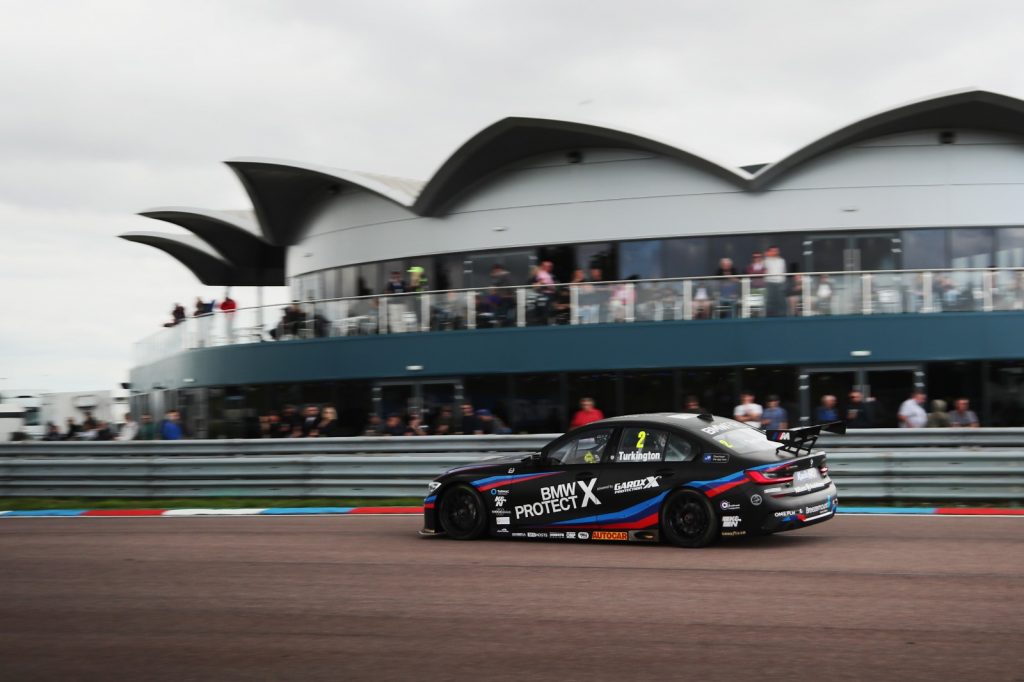 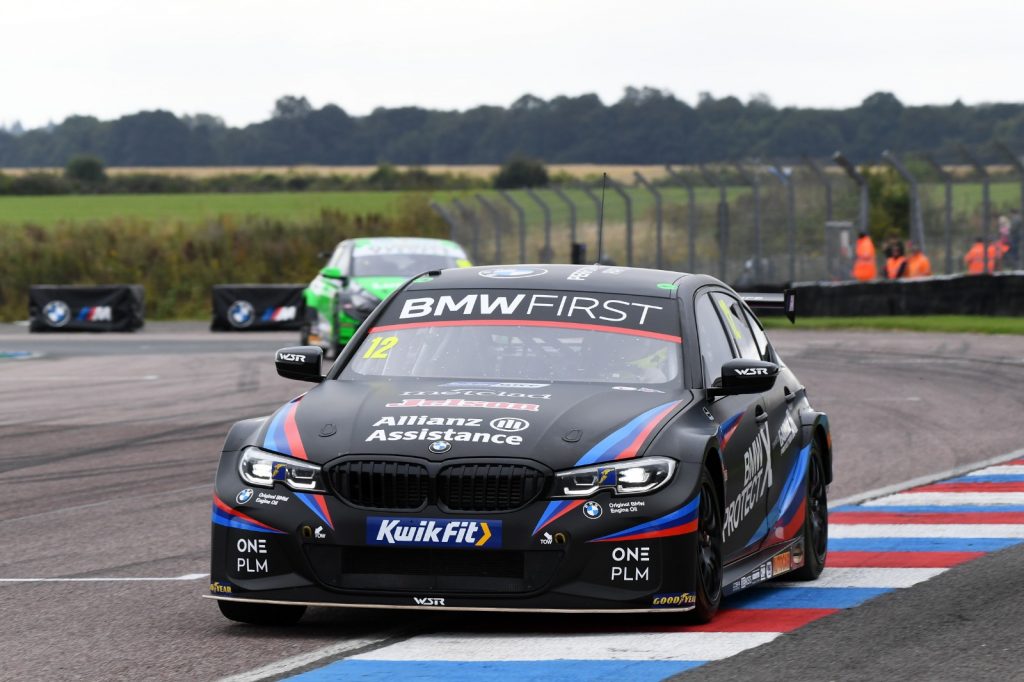