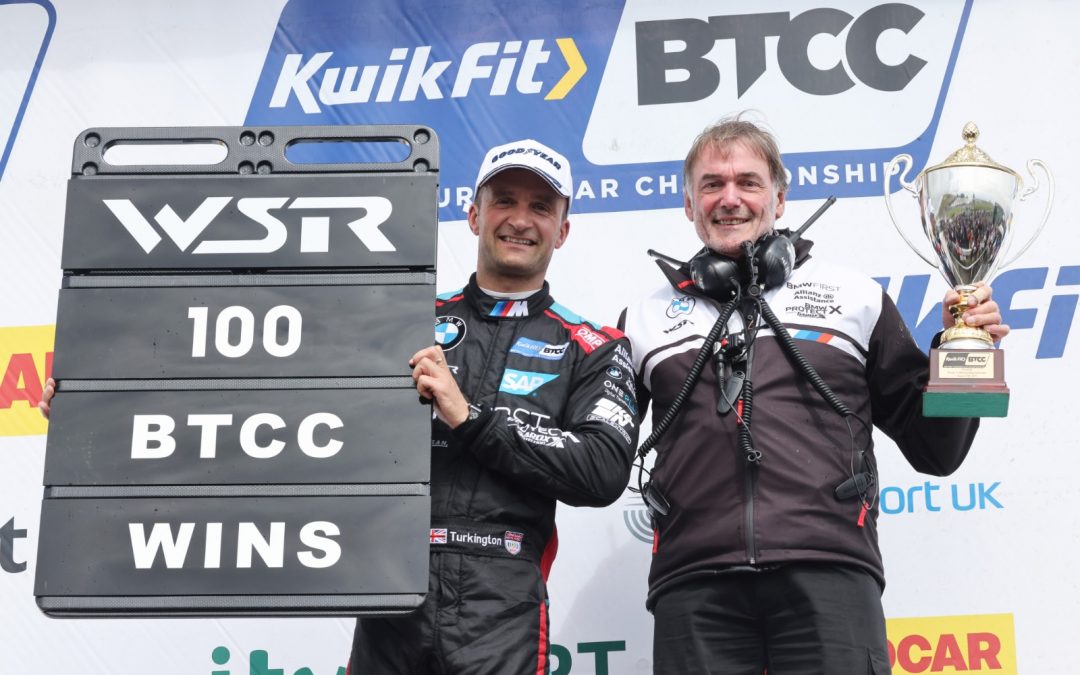 Colin Turkington stormed back into British Touring Car Championship contention as he gave WSR – the organisation behind Team BMW – a milestone 100th victory in the series on an action-packed day at Knockhill.

The Northern Irishman was in imperious form in the first of three races as he led every lap from pole position and set fastest lap on his way to a hugely significant win, which was also his second of the season in his BMW 330i M Sport.

That was a fitting start to a day on which Team BMW won the Teams’ Trophy as the event’s top scorers, and on which BMW were the winning manufacturer in each of the three races – further increasing their lead in the Manufacturers’ points table.

For WSR, Colin’s win made them only the third team in BTCC history to achieve 100 victories; their first having come at Silverstone in April 1998. It was also the 75th victory in the series with BMW.

Carrying the series’ maximum 75kg success ballast in Race Two as a result of his milestone win – his 58th in the BTCC – Colin again led the field and resisted intense pressure until the final lap, when a minor error caused him to slide wide at the chicane on the final lap.

That meant he finished second to record his fourth podium finish of the season. He added eighth place in Race Three as he surged up from ninth to third in the Drivers’ points.

Having qualified 14th, Stephen Jelley set his stall out to keep away from trouble in the opening pair of races and did so to finish 11th and ninth.

The Leicester racer magnificently led the finale, having been drawn on reversed-grid pole position, but running the less favourable medium tyre, was being pressurised from behind throughout.

Stephen dropped to third by the chequered flag, but still secured podium finishes at successive BTCC events for the first time in his career. He also climbed a spot to eighth in the Drivers’ standings.

Tom Oliphant endured a luckless day. The Leamington Spa-based racer was on course for a top-10 finish in Race One when he was turned around by a rival at the hairpin and dropped out of contention.

Starting from the back row in Race Two he tore through the field to finish 17th and then made further progress in the finale to salvage two points for 14th.

Colin Turkington said: “This weekend was all about trying to get back in the championship hunt with only a small amount of success ballast and a BMW that suits Knockhill, and we’ve done that. We had the BMW in the zone all day, no matter what the weight situation was, and to get a win and a second place is going to be so important heading into the second half of the year. I feel a huge amount of pride at being able to give WSR their 100th BTCC win. I made my BTCC debut with WSR in 2002 to be the one to get that milestone result for a team that’s had such sustained success feels fantastic.”

Stephen Jelley said: “That’s two podium finishes in two successive weekends, and I can’t remember the last time I did that in the BTCC. I’m still learning how to get the best out of the BMW and after not qualifying as well as I should have, I had to pin everything today on working towards the reversed-grid race. I navigated my way through the midfield quite well and from pole in Race Three I thought the win was on, but it wasn’t to be. We’ll have to do it at Thruxton instead.”

Tom Oliphant said: “I feel like I’m driving better than at any other point in my career, and yet I’m having the worst luck at the same time. I wanted to get a big result this weekend to thank everybody who’s worked so hard to put my car back together since Oulton Park, but contact from behind in Race One put an end to that idea. The target for the second half of the season is to just go for it absolutely everywhere and win as many races as possible.”

Dick Bennetts, Team Principal, said: “100 wins! It’s a big number and I can’t remember all of them. I remember the first one in 1998 with Will Hoy at Silverstone and number 100 from Colin today is very fresh in the memory. Colin did a very good job to out-score everyone else and move up a lot of places in the championship. Stephen’s had another good podium and Tom’s hopes of points have again been taken away because of a pretty bad move from another driver that yet again hasn’t been punished. The main thing is we’re back on track with half the season still to go.” 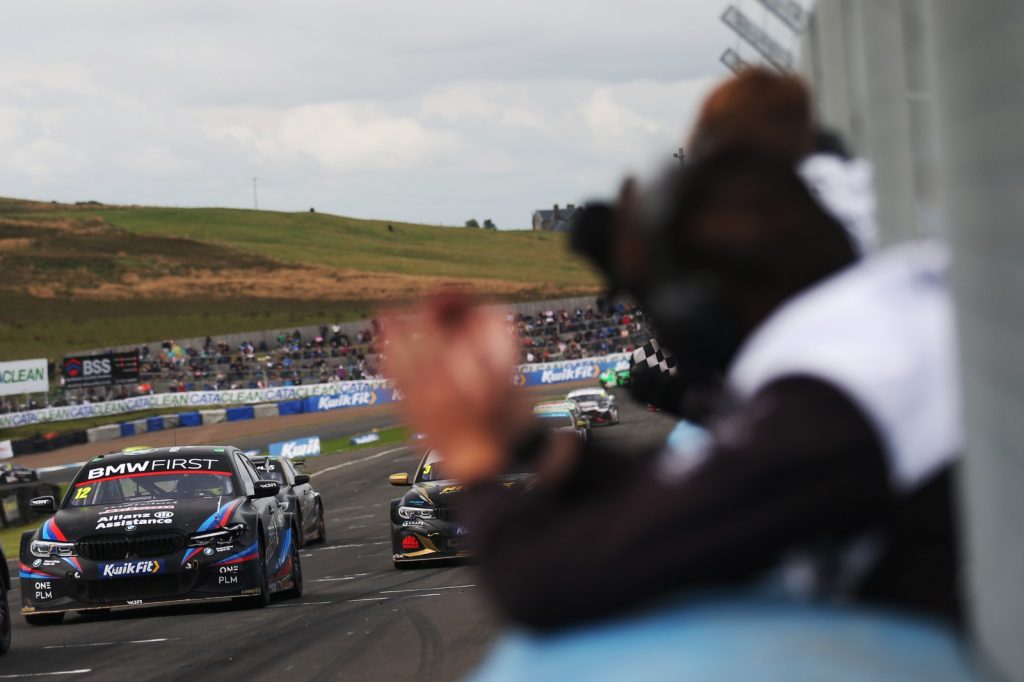 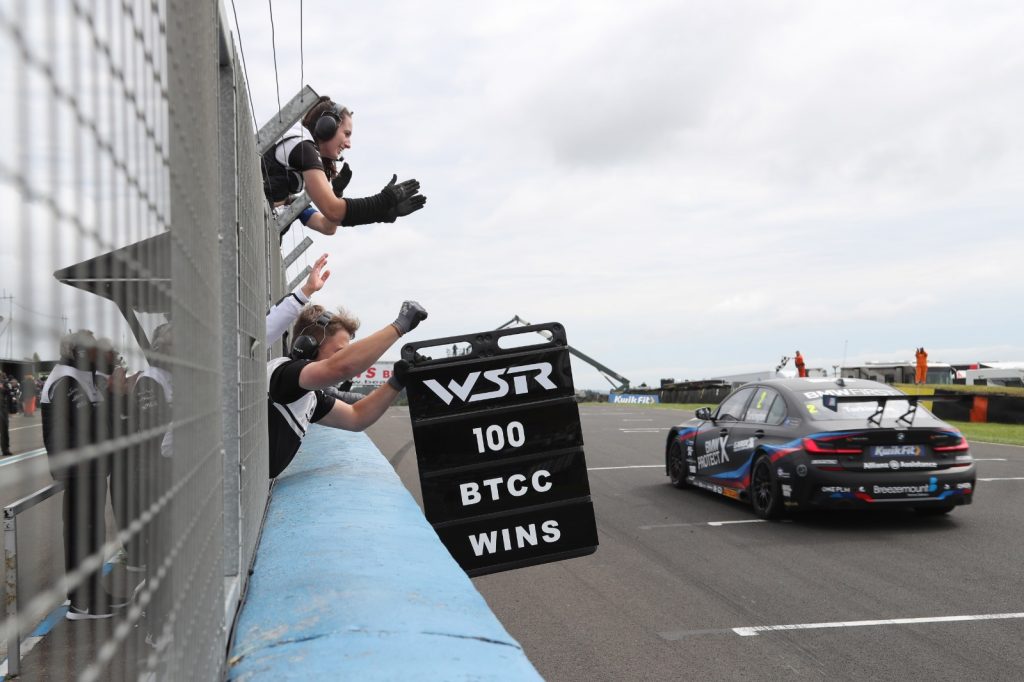