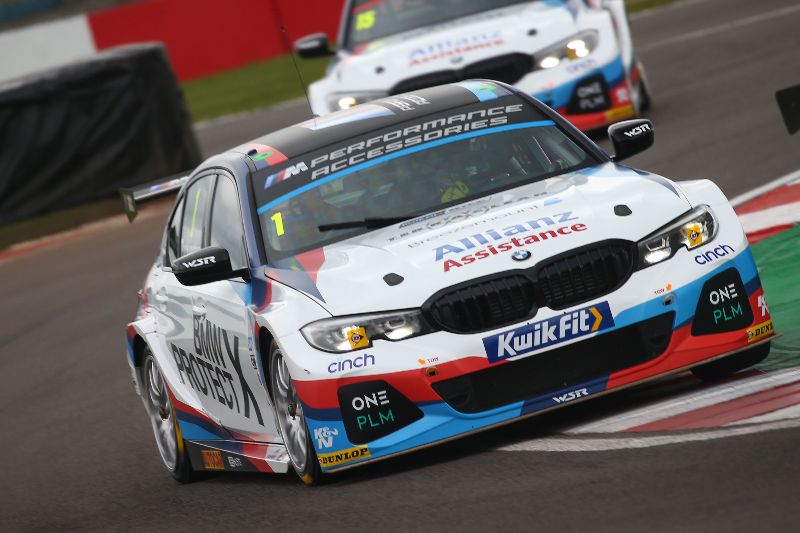 Team BMW head to the UK’s fastest circuit, Thruxton, aiming to continue the impressive start made with the new 330i M Sport to the British Touring Car Championship.

A magnificent double victory at Donington Park in April vaulted reigning Champion Colin Turkington to third place in the Drivers’ points table as well as elevating Team BMW to the head of the Teams’ standings.

With new team-mate Tom Oliphant adding to the WSR-run team’s success by securing his maiden BTCC podium finish in Race One, the weekend was a superb one.

Colin’s Donington double brought the Northern Irishman to 48 career victories and a share of fourth spot on the BTCC’s all-time winners’ list.

Team-mate Tom has enjoyed a stellar start to his Team BMW career; the Leamington Spa racer scoring his best BTCC qualifying result with fifth at Brands Hatch and then finishing on the podium for the first time at Donington.

This will be just Tom’s second time racing in the BTCC at Thruxton, but the 2.4-mile speedbowl, near Andover, Hampshire, has provided him with podium finishes in a variety of support categories earlier in his career.

The Thruxton triple-header on May 18-19 is the third of 10 events in this year’s BTCC, which takes in eight circuits the length and breadth of the country. Each race will be screened live and exclusively on ITV4 in HD.

Colin Turkington said: “It’s been a superb start to the season, which is no less than everybody at BMW and WSR deserves for their efforts, and I’m really looking forward to Thruxton. It should suit the characteristics of the 3 Series better than the 1 Series, particularly in high-speed corner stability. The test there last month was very productive and allowed me to tailor the new car much more to my liking. The aim is simply to keep on scoring good points and convert opportunities into results. I’ll carry 36kg of success ballast into the weekend, but we coped well with the weight in race two at Donington so I think we’re in good shape.”

Tom Oliphant, Driver, Team BMW, said: “I’m really excited for Thruxton, and it’s great to be going there off the back of my first podium finish with Team BMW. It was extremely rewarding to tick that one off so early on in the season, and I already feel at home in the 3 Series and inside the team. I cannot stress enough what an amazing job the WSR guys have done to get this car to the level it is at, and it should work well at Thruxton. The 3 Series is naturally a very aerodynamic car, which will play to our strengths, so I think we can be quietly confident ahead of the race weekend.”