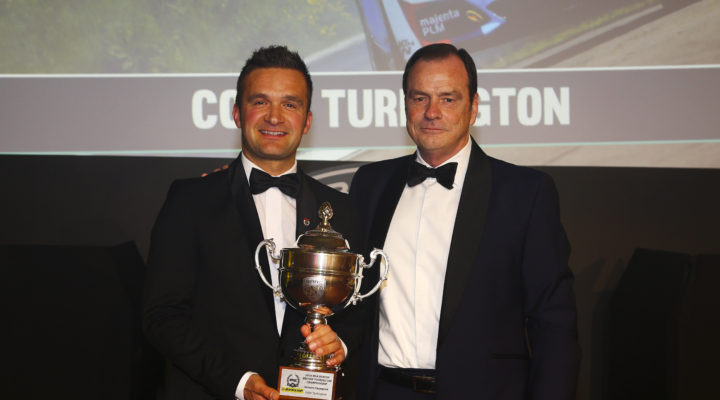 The best of UK motorsport came together this past weekend for one of the marquee events in the British Automobile Racing Club calendar, the prestigious BARC Championship Awards Evening.

More than 200 drivers, marshals, officials and leading BARC figures were collectively in attendance at Chesford Grange Hotel during the evening, again hosted by the superlative Alan Hyde.

Elsewhere at the venue Stuart Coombs’ Mighty Mini, Lewis Saunders’s Junior Saloon Car and Jon Curry’s Caterham were also on display for all to see, turning heads and drawing plenty of attention throughout the night.

With a mesmerising and deserving list of champions being honoured throughout the evening, those in attendance also had the opportunity to look back on some of the best bits from each championship too.

Alongside the customary championship awards were a further three secret accolades, all of which were handed out to unsuspecting winners. The Densley Trophy, which is awarded to the most outstanding female driver in the BARC, went the way of BARC Clubmans Sports Prototype Championship in association with King Henry’s Taverns CSP2 champion Michelle Hayward, who delivered an emphatic performance throughout the 2018 campaign.

The Peter Collins Memorial Trophy, which is bestowed upon the most promising newcomer competing at BARC events during the year was awarded to Lewis Saunders, who stole the show in the Junior Saloon Car Championship.

Max5 Racing champion Paul Roddison meanwhile scooped The Presidents Cup, presented to the most successful driver competing below International level after producing an astonishing performance in 2018 on the way to the title.

Two marshals also shared the spotlight on the night too as Dave Hodgson picked up the coveted BARC Marshal of the Year award. Meanwhile Ken Watts lifted The Sir Clive Bossom Trophy virtue of completing the most volunteering days over the course of 2018, 30 in total.

Capping off the list of winners was Sonny Howard, who was awarded with the coveted Gerry Marshall Trophy. Bestowed upon a driver or BARC member that the BARC believes epitomises Gerry Marshall’s philosophy to motorsport, with Howard fitting the bill perfectly.

Having been a significant force behind the Pickup Truck Racing Championship and a variety of other BARC categories as well, Howard was honoured for his outstanding service to motorsport – upon which he has always gone above and beyond to serve down the years.

“The 2018 season proved to be another spectacular year for the Club and its championships with an abundance of edge-of-the-seat thrills and entertainment being provided throughout.

“Returning to Chesford Grange, having cars on site was a fantastic touch and they all looked fantastic situated around the venue. Every award was richly deserved and the evening has set us up to kick the 2019 season off in fine style in roughly a months time.”

In addition to the prize-giving, a total of £1860 was raised and donated on the night to the BARC Marshals and Rescue Fund.