BTCC’s fastest track next up for Team BMW 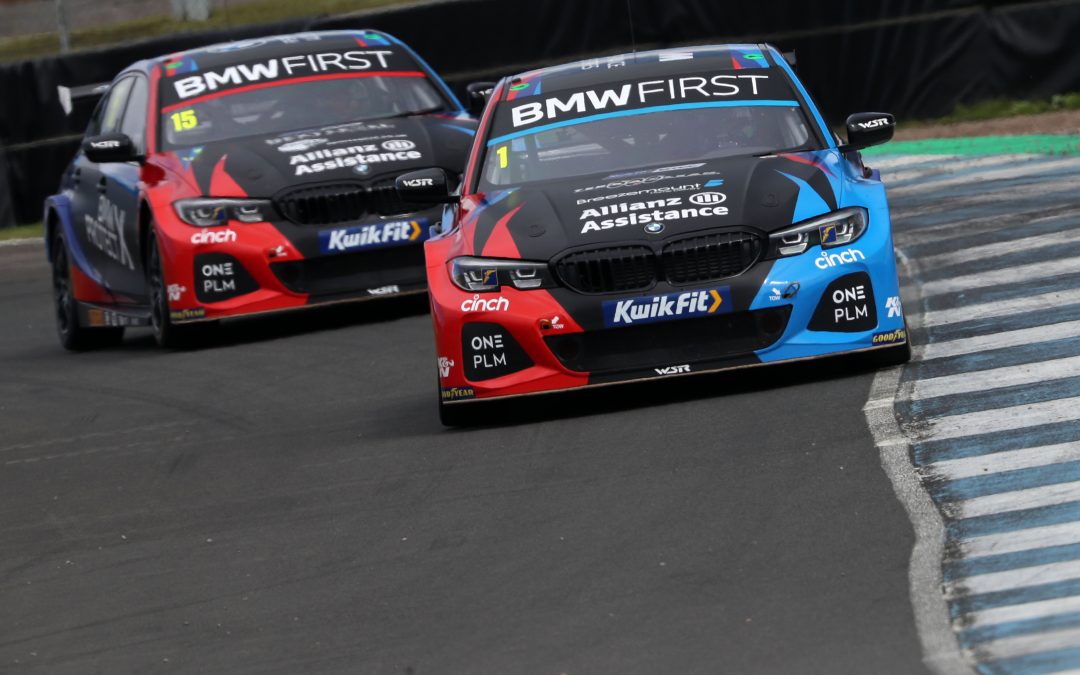 Team BMW aim to strengthen their position as British Touring Car Championship leaders when the 2020 season reaches its halfway point at the series’ fastest circuit, Thruxton, this weekend.

With Colin Turkington and Tom Oliphant first and fourth in the Drivers’ points table and the Teams’ and Manufacturers’ title races also being led by the WSR-run team, it’s been a great start to the season.

Three wins and 11 podium finishes from the 12 races so far have been a result of spectacular reliability from the pair of BMW 330i M Sports plus some superb on-track performances.

Northern Irishman Colin holds a 10-point lead in the battle for the Drivers’ crown after a best-ever start to a BTCC campaign that has included two victories and a double-podium at each of the four events held so far.

Thruxton has been the scene of four of his 53 career BTCC wins so far, but the task of adding to that total has been made harder for the four-time champion due to the maximum 60kg success ballast he must carry through practice, qualifying and the opening race as points leader.

Team-mate Tom, now in his third year of BTCC competition, is enjoying his best season to date in the series.

With a maiden race win at Brands Hatch and two further podium finishes, the Leamington Spa-based driver is fourth in the championship and so carries 42kg into the weekend.

Tom – one of only three drivers to score points in every race so far this year – secured a pair of top-five finishes on the BTCC’s most recent visit to Thruxton last August and is keen to take another step forwards and finish on the podium this time.

For the second event in a row, all three races will be broadcast live in HD on ITV2 on Sunday.

Colin Turkington said: “The past two weekends have gone really quickly and I’ve spent quite a bit of time looking back over what we did at Knockhill and using that knowledge to prepare as best as I can for Thruxton. It’s a completely different challenge, so we’ve had quite a few engineering discussions to make sure we go there with the fastest car we can. Thruxton is the only circuit this year where we use the hard-compound tyre, which is because of the abrasive surface and the high-speed, long, loaded corners. Stability in those corners is important and that’s an area where the BMW 3 Series is strong because of its long wheelbase. Thruxton takes no prisoners, so confidence in the car underneath you is also very important. Being fast is all about managing the tyres, so that will be a key factor on raceday.”

Tom Oliphant said: “It’s been a really positive first half of the season for me. Together with the team we’ve got some great results from the BMW, including my first win. It’s been hugely intensive though with 12 races in five weekends, so it’s been good to recharge the batteries since Knockhill. Last time at Thruxton I was inside the top 10 in all three races and in the top five twice. WSR have definitely improved the car since then, so I think we have everything we need to go out and score more big points and hopefully gain a bit of ground in the title fight.”

Dick Bennetts, Team Principal, said: “The almost three-week gap between Knockhill and Thruxton gave us a much-needed break and meant some of the team members could take a few days off for the first time since July. Everyone’s come back more motivated than ever to continue this strong start we’ve made. The new BMW 330I M Sports haven’t missed a beat since the start of the 2019 season and this, along with the quality of the preparation and both drivers’ ability to maximise every opportunity that’s come their way this year, have been the keys to our position in the championship. The stakes get higher as we move into the second half of the season. We’re the ones everyone wants to hunt down, but we’ve been in this position before and that experience will be crucial at what’s both the home circuit for ourselves and BMW UK.”

2000 – David Leslie – a regular rival in Formula 3 in the early 1980s – makes his only appearance as a WSR driver as a BTCC stand-in for James Thompson, who missed the event through injury.

2006 – Colin Turkington leaves the rest trailing as he wins in the WSR MG ZS by over 11 seconds – one of the largest winning margins achieved in the BTCC since the 1980s.

2009 – Colin Turkington takes his BMW 320si to his first victory of what would be his maiden title-winning season.

2017 – Colin Turkington’s Race Three victory is not only the team’s second of the day, but also BMW’s landmark 100th race win in the BTCC.

2019 – Andrew Jordan secures a dominant double victory on the first visit to Thruxton by the BMW 330i M Sport.