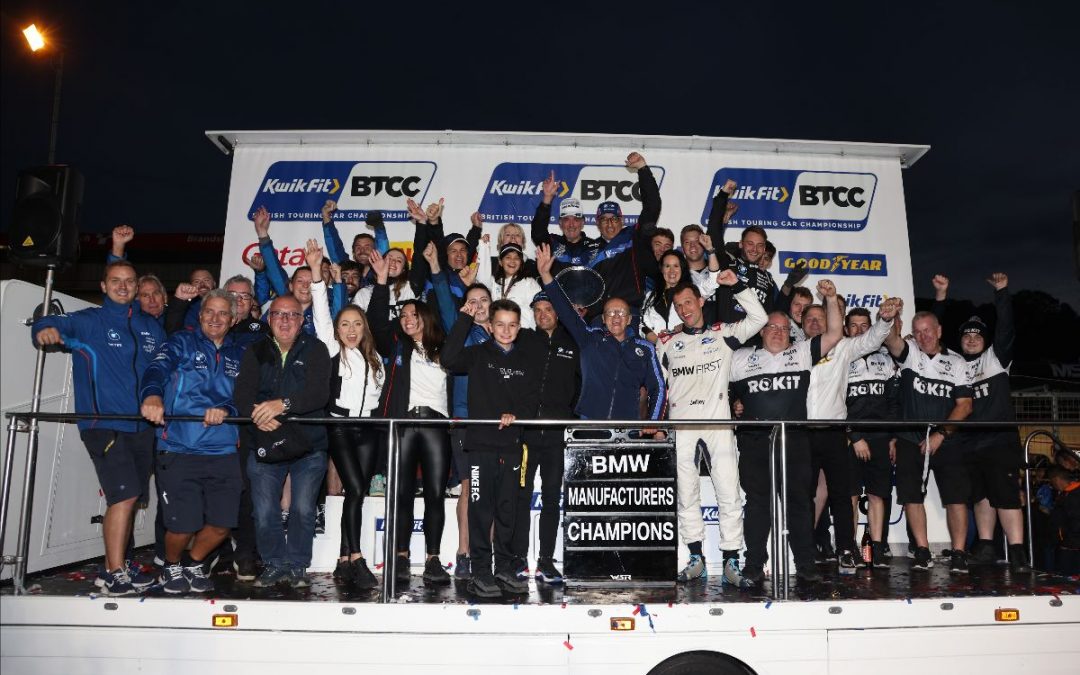 The success was the 16th BTCC title for the Sunbury-on-Thames team – all of which have come with BMW race cars – and the 15th in the past nine seasons; the trophy accepted by BMW UK Chief Financial Officer Tomas Valero Ribes.

ROKiT MB Motorsport’s Jake Hill and Team BMW’s Colin Turkington – both of whose cars are prepared and run by WSR – began the day in a four-way battle for the Drivers’ crown, with Jake the closest contender, only five points off the series lead.

It was Jake – who qualified his BMW 330e M Sport fifth – who staked his claim for the crown most strongly; third spot in Race One followed by second in Race Two – taking him into the season finale 11 points away from the series lead with 22 available.

Try as he did from ninth spot on the partially-reversed grid, seventh place wasn’t enough for the crown, but did seal third place in the standings – a career-best result – for the Kent racer.

Colin was one of the stars of Race One as the Northern Irishman surged forwards from 10th on the grid to fifth by the chequered flag.

He improved to third in Race Two, but unfortunately was ruled out of title contention due to the finishing positions of his rivals. The four-time champion was then baulked by a spinning car in Race Three, dropping from eighth to 15th, but rising back to 12th by the flag.

He finished the season fourth in the Drivers’ points, having risen to equal-second in the BTCC’s all-time winners’ list this year.

Team BMW team-mate Stephen Jelley made up one position to finish 10th in the opener and was on course for seventh spot in Race Two when an error at Clearways led to the Oulton Park race winner running wide and dropping to 15th.

A fighting performance from 15th on the Race Three grid netted him ninth spot, which was enough to secure second place in the Teams’ points for Team BMW and 11th in the Drivers’ standings for Stephen.

The combined results of Jake, Colin and Stephen resulted in 27 podium finishes from 30 races – the most number of top-three finishes ever recorded by WSR in a single BTCC season.

Jake Hill (ROKiT MB Motorsport) said: “Firstly a huge thank you to everyone at WSR, ROKiT MB Motorsport and BMW. I love it here and have never felt more at home in a team than I do here. I love the ethos and there’s nowhere else I’d rather drive, plus I’ve been part of a Manufacturers’ title-winning season for BMW, which is awesome. I’m proud of what I’ve done this year and I think I can hold my head relatively high. I’m the best-place rear-wheel-drive racer in the points, I’ve beaten my team-mates Colin Turkington and Stephen Jelley in my first year in the team, which I think I can be proud of. For better or for worse, it wasn’t meant to be today, but I’m sure we have everything we need to come back stronger from the experience.”

Colin Turkington (Team BMW) said: “It’s been a good day in what’s been quite a difficult run-in to the end of the season. Silverstone derailed my campaign and it took a long time to iron out the issues we had with the hybrid system. The BMW was very strong today though. I could race well in Races One and Two and then in Race Three I just had to stay out of the title fight. I wanted to help Jake if I could, but when both he and [Tom] Ingram came by, I just decided to let them go, knowing I was out of the title fight. We know where we are with the BMW better through what we’ve experienced today, I’ve had a podium and I’ve had no hybrid issues today. Fourth in the Drivers’ Championship is what it is, but we’ve won the Manufacturers’ Championship again, which is a proud thing to be a part of.”

Stephen Jelley (Team BMW) said: “That’s two years in a row that I’ve been a part of winning the Manufacturers’ Championship with BMW, which is a proud moment. We absolutely had the race pace today, but by not qualifying as well as we’d hoped, it means you’re relying on making some big moves to come through. Race One was good, but in Race Two I made a very small mistake at Clearways that cost me a good finish, maybe a reversed-grid front-row start and a top-10 finish in the championship. But I made up six places in Race Three, having made a few set-up changes, and it gave me a really strong race car. It was a fun one.”

Dick Bennetts, Team Principal, said: “It’s a magnificent achievement to win the BTCC Manufacturers’ Championship once, but to win it seven times in a row for our partners at BMW is very special and makes me extremely proud of the job that everybody at WSR has done this year. We began 2022 with a new technical challenge with the hybrid system and a new driver in Jake Hill, but the team has adapted fantastically and Jake and the ROKiT MB Motorsport team have performed at a very high level all year just as Colin and Stephen have in the Team BMW cars. We threw everything at it this weekend to try and win the Drivers’ and Teams’ titles as well, but you can’t win them all. I’m very pleased with the level of effort from all three drivers on the track today. They all fought hard, but they fought fair and ultimately that’s what everybody wants to see.”