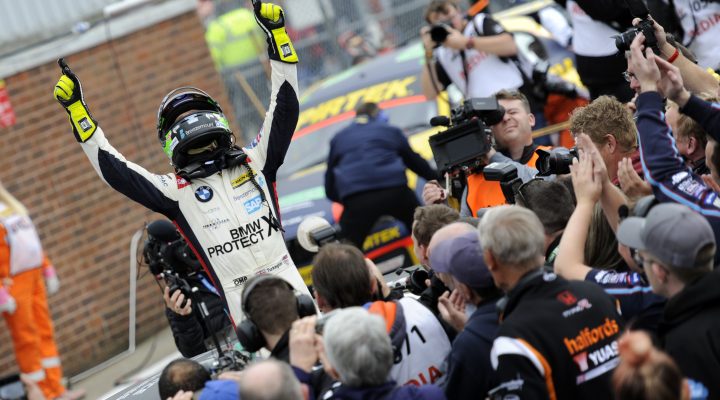 Halfords Yuasa Racing’s Dan Cammish made it two wins in two with victory in Round 29 of the Dunlop MSA British Touring Car Championship, heading home team-mate Matt Neal for a second Honda one-two of the day, while Colin Turkington secured an unassailable lead atop the Drivers’ standings.

The manufacturer-backed Honda squad has endured an up-and-down campaign in 2018, and left it until finals day to enjoy their best results of the season. Cammish led from start-to-finish whilst Neal benefitted from mechanical failure for the WIX Racing with Eurotech Honda of Jack Goff.

“It was a tough ask to go and win that with the ballast on-board,” said Cammish. “I got my foot down early to see if I could make hay. In the middle of the race, I thought we’d have a good chance but the team came on the radio to say Matt (Neal) was struggling – I thought I had to push but quickly found I couldn’t push any more!”

Goff grabbed second early on and was pressuring Cammish for the lead when his car ground to a sudden halt on the run out on the Grand Prix circuit. Neal inherited second and followed his team-mate home for the second time today, whilst BMW Pirtek Racing’s Andrew Jordan completed the podium.

Jordan’s result had added significance because he kept the charging Toyota Avensis of Tom Ingram behind him, with the Speedworks Motorsport star needing at least third place to keep his championship hopes alive.

Team BMW’s Turkington crossed the line in 22nd after a nervy nail-biting contest, but he had done enough to secure his third Drivers’ title. It has been an emphatic story of consistency for Colin during the 2018 season but this particular race proved dramatic as he tried to keep Ingram’s charge in sight. Unfortunate contact late on forced Turkington out of contention in the penultimate race of the season, but his hard work earlier in the season had already paid off.

“That was the most difficult race of the year,” said Turkington. “I was trying so hard. We didn’t have the car to go forward. I was getting shuffled back so quickly. The emotions are just so raw. I was driving around there preparing for a dog fight in race three thinking ‘how on earth I was going to get forward’. I wasn’t expecting the news on the radio that I’d won. I’m so pleased for so many people. The first one, I really wanted it for me. It was my goal in 2009 and I wanted it more than anything.
“With BMW’s support coming on-board last year, it’s so special to win it for them. It’s an amazing achievement and for West Surrey Racing, too – they never give up. We’re always the last in the pits on Saturday evening – we just work, work, work. That’s the secret. We never had the fastest car this year, we just kept at it, scoring points. I’m so pleased for my family. We knew coming into the season that you’ve just got to score points. It’s very difficult to do as you can see from that race. I’ve had one win but ten podiums and they are as good as wins in this championship.
“This is the one that I wanted for my Mum, for Tipper (West Surrey Racing truck driver) and for Steve. There’s so many people that I wanted it for, I’m so pleased for them and for my mum.”
An equally emotional Ingram had just fallen short in his incredible challenge to win a maiden BTCC title, but the Toyota star was magnanimous in defeat, whilst also able to celebrate an unassailable lead in the Independent Drivers’ standings.
“I gave it everything I had,” said Ingram. “The boys worked so hard for that race as they have done all season. We had to give it everything but well done to Colin (Turkington), he’s done the job again. He’s ever the professional. He scores the points and knows what he needs to do. I’d have loved to have beaten him – maybe next year. We had no tyres left, no brakes left and there was nothing more I could have done. I gave it absolutely everything. For everyone at home that have shown us so much support this year, I can’t thank them enough.
“We’ve still got the Independent Teams’ to fight for as well as second spot in the Drivers’ to secure. I can’t thank everyone enough behind the scenes. We’ve had a stellar year. We had a series of circumstances that transpired against us this year but it’s what makes you want it even more. I’m going to have a little moment to myself but we know what we can work on and we’ll come back even stronger next year. We’ve not started yet!”

Laser Tools Racing’s Aiden Moffat produced another great performance to take fifth, ahead of Tom Chilton’s Ford Focus and Senna Proctor’s Vauxhall Astra. Seventh placed proved a great return for outgoing champion Ash Sutton as the Adrian Flux Subaru Racing star surged through from the back of the grid.