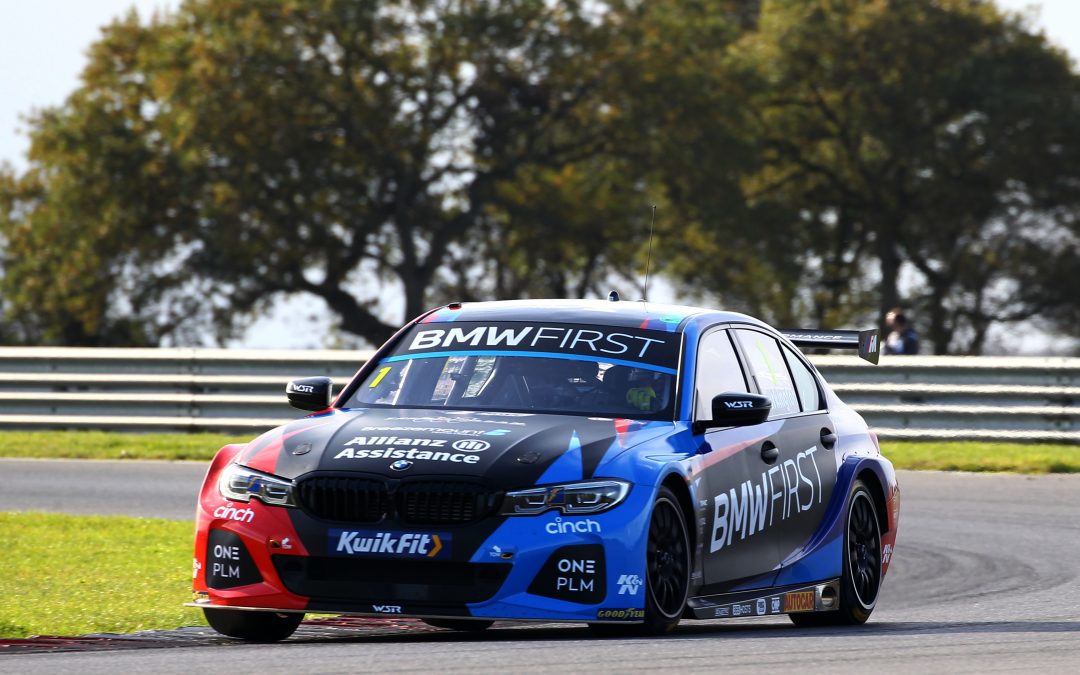 Team BMW are targeting a treble-title success at Brands Hatch this weekend as the British Touring Car Championship reaches a thrilling climax.

A sensational double victory last time out helped Colin Turkington to reclaim the championship lead; the Northern Irishman holding a vital nine-point advantage with 67 available at the triple-header finale and five drivers still in the title hunt.

With six wins and 17 podium finishes between them, Colin and team-mate Tom Oliphant have put Team BMW on top of the Teams’ points while BMW also lead the Manufacturers’ title race.

Colin has a strong record on the 1.2-mile Brands Hatch Indy circuit. It is where he claimed his first race win in the series in 2003 with WSR and the scene of three further victories.

His status as championship leader means he must carry 60kg success ballast in his WSR designed, built, and run BMW 330i M Sport, making his car the heaviest in the field during practice, qualifying and the first race.

Teams’ title success would be WSR’s fifth in seven years while BMW could equal the BTCC’s all-time record of five consecutive Manufacturers’ crowns.

The 30-year-old has collected four podium finishes this year, has already exceeded his best ever season-long points total, and is on-course to finish inside the championship top six for the first time in his BTCC career.

Leamington Spa-based Tom retains a chance of ending the season as high as third in the points. His current sixth place in the standings means he enters the weekend with 30kg success ballast in his BMW.

In a change to the normal format, there will be just a single 60-minute practice session on Saturday morning with qualifying earlier than normal from 1235-1305.

Sunday’s three races will be screened live in HD on ITV4; with Race One starting at 1000, Race Two at 1232 and Race Three at 1514 to prevent the meeting running into darkness.

Colin Turkington said: “The season finale is so special because there is such a big prize at stake. We’ve worked towards this goal all year, dedicating and sacrificing on many levels to try and come out on top. The scale of the prize brings extra pressures and intensity, and that creates an electric atmosphere. I’m a competitive person when it comes to racing and I enjoy the challenge, so ultimately winning is the drug and that’s the feeling I’m always chasing. I hope everyone watching at home will enjoy the show. There will be three great races to end an already thrilling season. I’m already excited so I can imagine everyone else is too.”

Tom Oliphant said: “I can’t believe we’re at the final round of the season already. It’s been a rollercoaster year. I’m really proud of what myself and Team BMW have achieved so far. Going into Brands Hatch this weekend, I’m focusing on challenging for pole position and trying to take another race victory to really end the season in style.”

Dick Bennetts, Team Principal, said: “It’s the sixth time in seven years that we’ve come to the final round in with a shout of at least one of the main BTCC titles, and I think that shows the strength of our team at WSR and of the BMWs that we’ve run in that time. We’ve left no stone unturned in preparing for Brands Hatch and the experience we’ve had of being involved in title fights will hopefully help us in this regard. As we’ve seen plenty of times, anything can happen in the BTCC when you have so many good drivers in the title hunt and we’ve won some and lost some in past seasons. As last year proved, you can never predict what’s going to happen – even up to the last lap, so we’ll need to be on top form to make sure we can get the job done.”

2001 – An inspired slick-tyre gamble on an ultra-wet track gives Anthony Reid victory in only WSR’s third event with the all-new MG ZS.

2008 – Rookie Stephen Jelley scores a shock pole position in the dying seconds of one of the most exciting qualifying sessions for years in the BMW 320si.

2012 – Rob Collard starts the season with an impressive victory in the first race for the WSR BMW 3 Series since switching from a normally-aspirated engine to a turbocharged unit.

2015 – Rob Collard wins in his BMW 125i M Sport, 24 hours after WSR stablemate Andy Priaulx claimed pole position for his first BTCC race back after a 13-year lay-off.

2019 – Andrew Jordan gives the brand-new BMW 330i M Sport a victory on its debut BTCC weekend – 10 days after the car first turned a wheel.