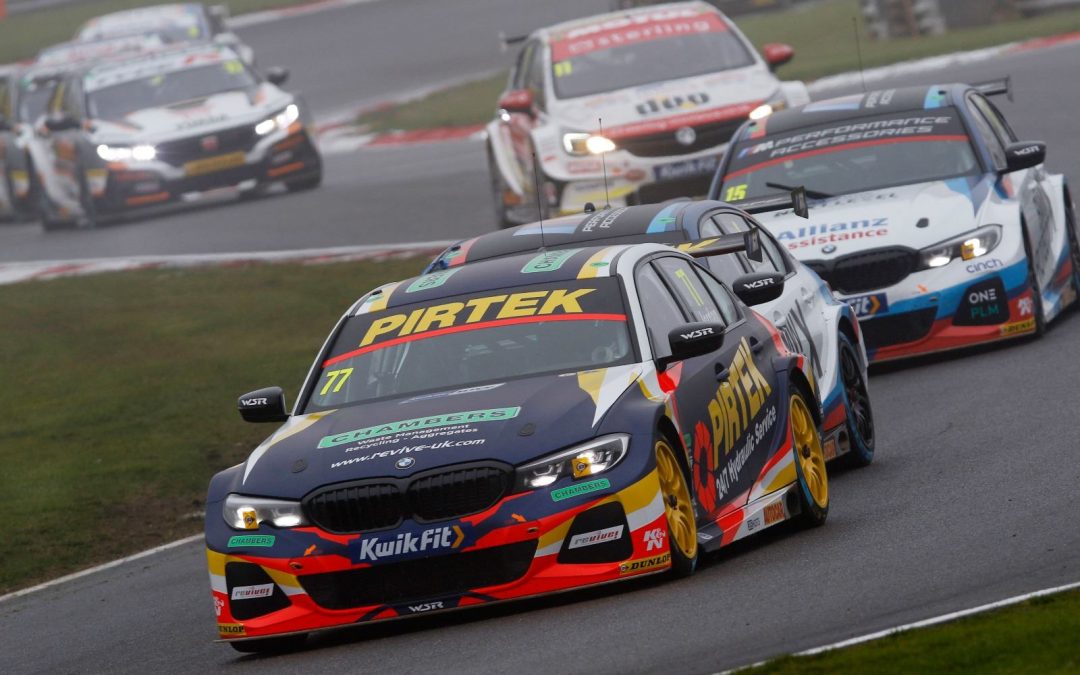 Andrew Jordan took a brilliant first victory for the brand-new BMW 330i M Sport at Brands Hatch at the opening British Touring Car Championship weekend of 2019.

The BMW Pirtek Racing driver charged through from 15th on the grid in Race Two to deliver a masterful performance in a car that ran beautifully once the 1.2-mile Indy circuit dried out from early rain.

Treacherous track conditions had blighted the first race and the WSR-run team opted to start on Dunlop wet tyres, but once the race got underway, those further down the grid who had gambled on slicks proved quicker.

Despite running second in the early stages, from third on the grid, the 2013 champion faded to 15th by the flag.

Determined to fight back in Race Two, and equipped with the superior-on-the-day control tyre, Andrew rocketed off the line and by the end of lap one had passed seven cars.

He then dispatched rival after rival in a scintillating display that culminated in him moving into the lead on the outside of the pit straight with eight laps to run. Fastest lap and a dominant win were just reward for a superb drive.

With 54kg of success ballast and the option tyres underneath him, Andrew was never likely to repeat that performance from 11th on Race Three’s partially-reversed grid, but still he fought gamely in the top 10 before contact forced him to pit.

Andrew Jordan said: “This has been an amazing weekend for us and the new BMW 330i M Sport. To get the first win for the new 3 Series on its debut weekend means everything to me. An hour into the first day we tested it, I was ready to race it. The car felt very good all weekend. I was a little bit cautious in the damp because we used to struggle with that with old car, but it felt very good. In Race Two, I was conscious of protecting the control tyres, especially since all the people around me were on softer tyres. But the option tyre turned out to be less competitive and after that it was a case of picking them off one by one. When it came to Ash Sutton in the lead, I knew he would be a tough cookie so I had to try and be patient. But his tyres were deteriorating, and my car felt very strong. So I tried to be on him coming off Clearways and with his tyres getting worse my advantage was greater. Last year felt winless for me [in spite of an inherited victory at Knockhill], so to get this victory in such commanding style is great. I did the easy bit though, the team have done an astonishing job with this car.”

Dick Bennetts, Team Principal, said: “That is mission accomplished for us. AJ has looked strong all weekend and in Race Two, when he was on the control tyre, the car was just mega. We’ve won quite a bit at Brands Hatch with the old car, but I think while we are still tapping into the new BMW’s potential, we couldn’t have hoped to do so well so quickly. We are still learning what it likes, what it doesn’t like and have to do a stock take after this weekend. But now I am very encouraged. We knew we were good yesterday, and we just made a wrong tyre call in Race One, but the rest of the weekend has shown us we that have a strong year ahead of us.”